A number of high profile players have recently called for a poker blacklist, and the response from the community has been overwhelmingly positive. So why don’t we have something like this? Almost everyone likes the idea, and cheating is a huge problem, so why can’t we create a list of known cheaters who are banned?

The charges against Bryn Kenney have brought cheating and blacklisting to the fore in recent months. (Picture: PokerGo)

Like most players, I too would like to see cheaters banned from all online casinos and poker sites. Not only would that be a wonderful piece of justice, but it would eliminate some strong players from the game because most of the accused cheaters play well.

I think there are several reasons why accused cheaters tend to be good players. They’re obviously willing to do whatever it takes to win and are generally obsessed with poker, and they’re smart enough to figure out how to make cheating work for them. But the main reason is that most players who have been accused of cheating in the past few years are accused of using real-time assistance or RTAs.

RTAs clearly cheat, but they are also an amazing training resource. These players have played thousands of hands with the help of a database of pre-solved solutions. With so many repetitions, they probably have a better understanding of what a solver would do in a given situation than almost anyone on the planet.

So what would it take to get those solver wizards, who fooled so many players, banned from the game we love?

The first major obstacle to solve is the question of who would be in charge of the blacklist. Should we create a governing body for poker or contract with an independent third party to manage and maintain the list? Could the poker community agree on some respected members of the industry that most of us would trust? And, is there any chance that these people would accept the work and the hassle and lawsuits that would surely entail?

Let’s take Phil Galfond as an example since his name came up as someone who could facilitate a list like this. Do we really think Phil wants to accept a part-time job that pays nothing, distracts him from his other projects, exposes him to legal trouble, and makes him dozens of enemies in the world of high-stakes poker? No. And none of the other big names that might be good options for creating or verifying a banned players list either. 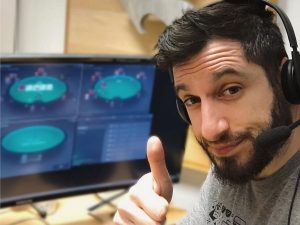 Would Phil Galfond be the right person to help run a poker blacklist? More importantly, would he? (Photo: farah_galfond/Instagram)

Legal challenges with a poker blacklist

I have my own opinion on the legal issues a blacklist would run into, but I also have a great resource in MacVerstandig, a poker playing friend and lawyer who has worked with a ton of poker pros. A quick call with Mac confirmed my suspicions, and he was able to give me names for many of the legal hurdles a blacklist would face.

In the United States, we have what is called the “American rulemeaning that each party to a lawsuit pays their own legal fees. There are exceptions to this, but they are rare in defamation cases, which is most of what a blacklist challenge would entail. This contrasts with the “English rule” where the loser pays the winner’s legal costs. There are arguments for both sides, but we are left with the reality that we live with American rule, which means that defending endless defamation suits would cost the owner of a poker blacklist a lot of money. , most of which could never be recovered. 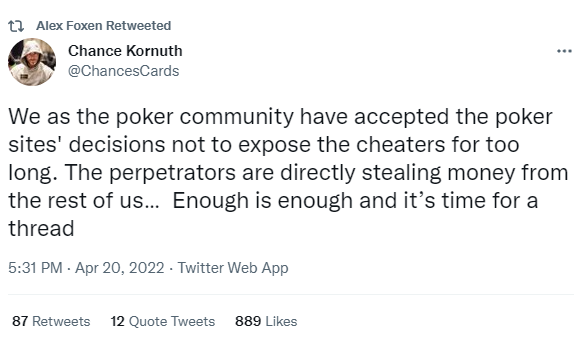 And anyone named on a poker blacklist would be liable to sue. Even if we were careful to say things like “suspected of cheating” or “accused of cheating by players X and Y”, the blacklist owner should still defend the prosecution. It’s likely that the blacklisted owner could win each of these suits and go bankrupt immediately.

Put yourself in the shoes of an accused poker cheater. You would press charges, wouldn’t you? I want. Because then you defended your name and hopefully took down the creators of the blacklist. Even if you lose, you can pretend, “I couldn’t prove I didn’t cheat, so they won.” The system is rigged against me. Most people wouldn’t give this any credence, but it would at least give you something to hang your hat on when someone calls you a cheater.

The second problem with a poker blacklist is that it probably wouldn’t accomplish anything. Few, if any, sites would ban players, no matter how much evidence a blacklist could provide. Russ Hamilton has admitted to cheating millions of gamers on video. Brynn Kenney has admitted to ghosting players, and there are dozens of other clear examples where players have admitted to sleazy behavior, but poker rooms welcome them and the rake they pay.

Any room banning a player due to a blacklist would also be subject to legal action. They would probably win these lawsuits based on the idea that they can ban anyone they want, but this old American rule would also apply to them, and they would spend money to prevent a player from entering their room and pay rake – something I just don’t see poker rooms doing. 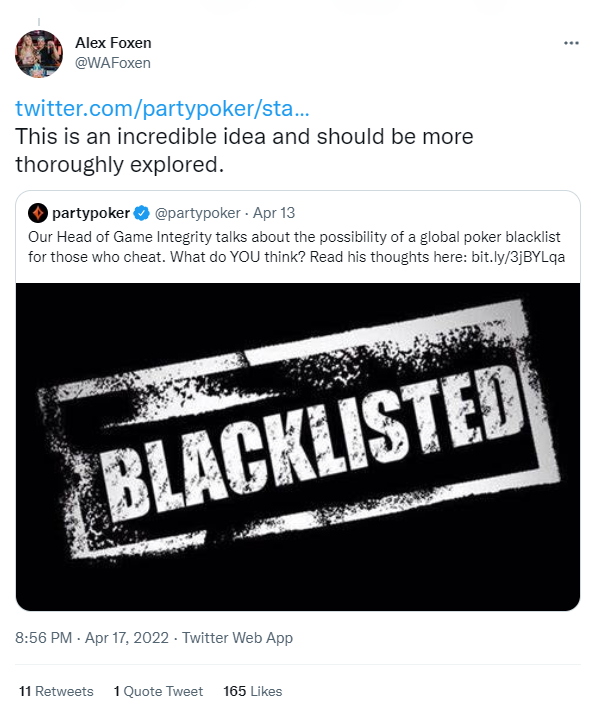 And there is no real incentive for rooms to ban these players. From a business perspective, having no cheaters in their room does nothing for them. We’d like to see them do it for the integrity of the game, but the dollar is king, and that integrity wouldn’t pay off.

“But we would boycott rooms that allow cheaters,” you say?

Maybe you would. Maybe you’re the only player out of 1,000 with enough conviction and integrity to stop playing in rooms that don’t enforce the blacklist. But a boycott means nothing if the vast majority of people ignore it.

I didn’t play The Venetian for many years when Sheldon Adelson was spending millions to make online poker illegal. It was probably the most successful boycott in poker history, and by that I mean it had no real effect on the Venetian’s poker room. They grew and grew because most players don’t care about a boycott. They just want to play poker.

So while you could proudly tell everyone that you only play at rooms that enforce the blacklist, you would simply be restricting your options without hurting those poker rooms’ revenue because hardly anyone would join you.

So, is the idea of ​​creating a poker blacklist really as hopeless as it sounds? Probably yes.

Honestly, I don’t think it’s likely we’ll see a blacklist with real teeth anytime soon, but there are ways around some of these issues. They aren’t likely and they aren’t easy, but they are possible. And there are a lot of smart people out there who could work to find solutions.

First, if it works, we would need a lot of public sentiment behind the blacklist, which means we need big names to be part of the movement. And no, Chance Kornuth and Alex Foxen aren’t enough, though their efforts are certainly appreciated. We need Phil Hellmuth, Doyle Brunson, Doug Polk and Joe Ingram – players who can put huge numbers behind this thing. And they should say they are boycotting and expecting everyone to boycott every play that does not enforce the blacklist.

We would need the media to spread the word and report what the big names were saying. I know I’m ready to fight and my editor here at CardsChat would support me as he has with other stories. I’m sure I could send a few articles to CardPlayer Lifestyle as well. And I have no doubt that my buddies Chad Holloway and Matt Hansen would help me at Poker News. If that happened, I think it would be a big enough story for all of the poker-related media, and probably some national media as well, to cover.

We need all of these things to get the word out to the casual gamer because there are a lot more out there than pros. Without recreational players, a boycott would serve no purpose. But if we could convince them that it’s shameful to play in a room that allows cheaters, we could actually give this thing a chance.

I haven’t asked Mac about it, but I know he cares about the integrity of the game and I suspect he would at least offer a little free legal advice. I imagine other poker-playing lawyers like Dutch Boyd, Jamie Kerstetter or Greg Raymer could help us, but we would probably need a lawyer from the UK or another country where US rule doesn’t apply. not apply.

This article certainly doesn’t cover all the possibilities of building a spam list, but hopefully it’s a meaningful contribution to the conversation. And while I wouldn’t bet on a working blacklist anytime soon, I would love to see it. I’m sure you do too.

This site uses Akismet to reduce spam. Find out how your comment data is processed.

Did you know our poker forum?

Discuss all the latest poker news on the CardsChat Forum

Professional poker players and esports pros have a lot in common. They both work hard to be the best at their profession, they both play games that require skill and strategy, and they both spend hours every day practicing their craft. As such, it’s no surprise that we see similarities between these two groups of […]

Detective Benoit Blanc receives a lot of attention. But Rian Johnson also has another murder mystery project in the works: Poker face. Johnson is the creator, writer and director of the series, which will air on Peacock. The previously announced streamer Natacha Lyonne would play. Today, Variety revealed five other cast members. Join Lyonne are […]